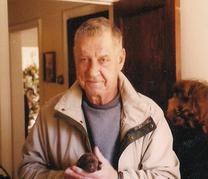 Born July 20, 1938 in Witherbee, (Town of Moriah), Mr. Matazinsky was the son of the late Alvin D. and Irene (O’Kusky) Matazinsky and for over 52 years the beloved husband of Elizabeth “Betty” (LaMountain) Matazinsky of Eagle Mills who survives.

Alvin was a graduate of Mineville High School, where he excelled at sports and the former Albany Business College where he earned an Associates Degree in Business Management.

On March 12, 1958, he was inducted into the United States Army. He served in Germany for sixteen months and earned the rank of Private First Class (E-3). He was honorably discharged on March 3, 1960.


For 13 years he was employed as an auditor by the Pioneer Savings Bank in Troy and later employed for an additional 15 years as a data processor by the NYS Department of Taxation and Finance in Albany. He retired in 2002.

In his quiet time, Mr. Matazinsky enjoyed hunting, fishing, gardening, woodworking in his basement shop, was an avid reader and loved watching and supporting his grandchildren in all of their activities.