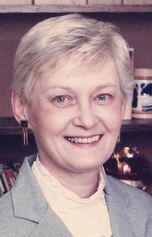 Born in Cohoes, January 28, 1935, Carol was the daughter of the late Albert J. Saddier and Cecelia S. (Bryk) Bailey and stepfather, Frederick D. Bailey. For over 60 years the wife and best friend of James F. Smith Jr. who predeceased her February 14, 2015. Carol and Jim were married December 19, 1954.

Carol was a graduate and Salutatorian of Lansingburgh High School’s Class of 1953.

As a young woman she worked for several years as the secretary and bookkeeper for the Troy Cemetery Association located at Oakwood Cemetery. After her marriage to Jim, she was a homemaker who enjoyed raising her growing family and caring for her husband and home. In the early 1970’s she was employed as an administrative assistant by the United States Internal Revenue Service Investigative Division in Albany. More recently she was employed as a mail carrier by the United States Postal  Service in Averill Park. After more than 10 years of service she retired in 1997.

Carol was former member and Sunday School teacher of the Union Gospel Church in East Poestenkill and a past Cub Scout Leader. She taught her daughter and sons how to climb trees, swim, skip stones and fish on the Poestenkill Creek as well as how to care for their many pets, both domestic and wild. She was the local taxi driver to school functions and Pop Warner football practices and often fed more kids at the dinner table than her own. She loved painting and poetry and was an avid reader who traveled the world through her books. Her most favorite pastimes were here trips to Myrtle Beach and spending time with her children and family.

A private funeral service will be held at the convenience of the family followed by interment at the Gerald B. H. Solomon Saratoga National Veterans Cemetery in Schuylerville. Relatives and friends are invited to call at the Howard B. Tate & Son Funeral Home Inc., 2237 NY Route 7, located in Raymertown on Wednesday, September 14, 2022 from 4:00-7:00 P.M.

Memorial contributions if desired  may be made to either Rensselaer County Unified Family Services, Aging Nutrition Unit or to Community Hospice in memory of Carol S. Smith.
​
Carol’s family would like to thank the doctors and nurses at both Samaritan Hospital and Albany Med for their care of Carol as well as the many friends and neighbors who have shown love and support for her through the years. In the words of Carol, “No more whiskey, I go home now.”
Proudly powered by Weebly