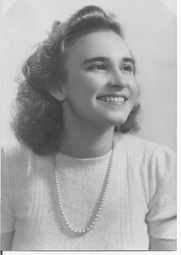 Hoosick Falls- Catherine “Katie” E. (Oakes) Goodrich, 91, died peacefully at her residence, Saturday, February 7, 2015, with her loving daughters by her side.

Born October 2, 1923 in Bennington, Vermont, she was the wife of the late Ray A. Goodrich and daughter of the late Kenneth and Elizabeth (Jordan) Oakes.

Katie was a graduate of Bennington High School.

She was a co-owner and partner with her late husband in the former British Motorcycle Sales in Hoosick Falls where she worked as the Office Manager. After more than 37 years of working at a career she loved, she retired in 1978.

An avid motorcyclist, as a young woman owned and drove her own Indian “Scout” motorcycle. She enjoyed spending time in the Great Outdoors, hunting, fishing and gardening. She was an excellent homemaker who took great pride in her cooking, baking, sewing and home decorating skills.

At the request of the family, in lieu of flowers a memorial contribution may be made to the Karen & Molly McGovern Fund,  P.O. Box 132, Hoosick Falls 12090, in memory of Catherine E. Goodrich.