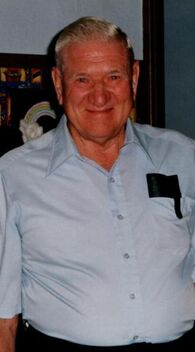 Born in Brunswick September 1, 1922, Clarence was the son of the late Elmer and Marion (Starks) Newton and the husband for over 57 years of Sylvia E. “Sue” (Reiser) Newton, who predeceased him in 2005.

In 1943 he enlisted in the United States Marine Corps., and served in the Pacific Theater in World War II . After earning the rank of Corporal as an aircraft armorer, he was honorably discharged on June 18, 1946.

Upon returning home, he was employed as an engineer with the B& M Railroad company in Mechanicville.  After more than 42 years of service, he retired in 1984.

Clarence was a life member of the Gilead Lutheran Church of Brunswick and served on the church council and also a member of the Phoenix Masonic Lodge.  In his retirement and quiet time, his most favorite pastime was visiting with his grandchildren and great grandchildren.

A funeral service for Mr. Newton will be held on Wednes- day, March 20, 2019, at noon (12:00 p.m.) at Gilead Lutheran Church, Brick Church Road, (Rt 278) in Brunswick with  Rev. Jeniffer Tillman officiating.  Burial will follow in Eagle Mills Cemetery.  Relatives and friends are invited to call at the church on Wednesday morning from 10:00–11:45 a.m. prior to the funeral service.

Memorial contributions, if desired, may be made to Gilead Lutheran Church, P.O. Box 26, Cropseyville, NY 12052, in memory of Clarence E. Newton.

Funeral service details are under the direction of the Howard B. Tate & Son Funeral Home Inc., 2237 New York Route 7, located in Raymertown.
Proudly powered by Weebly