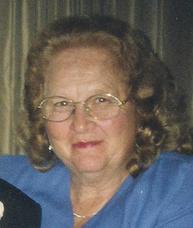 Born on the family farm in Melrose, NY, she was the daughter of the late Charles Remington Sr. and Grace Brown Remington, and the beloved wife of the late Milford E. Bornt. Dorothy and Mil were married on September 20, 1953 and she was a resident of Raymertown ever since.

Dorothy attended the Lincolnville District School and was a graduate of Lansingburgh High School. She worked as an operator for NY Telephone in the early 1950’s before becoming a homemaker and focusing on raising her growing family. She was a member of Ladies Home Bureau and the Evangelical Lutheran Church of Raymertown.

Dot was a true matriarch. She and her husband Milford raised six sons. As is the way with matriarchs, she was not perfect, nor did she pretend to be. She had a fiery temper to match her red hair. She held grudges, and was known to say exactly what was on her mind. Any faults were outweighed by her undying love for her family, both close and extended. She forgave bad judgment, but not before pointing out that it was indeed bad judgment, and expected and believed you would do better next time. Dot and Mil raised their sons to be good men, great husbands, and wonderful fathers and uncles. She was proud of them, and her pride extended through them to their wives, their children, and even their friends.

For Dot, food was love. She cooked and baked endlessly. Something was always cooling on her counter. She was known for her home cooking and nothing rivaled her baked beans or dill pickles. Her pies spoiled you for anyone else’s. No one left her table hungry. She always sent holiday meals to those that otherwise wouldn't have them.

She was her son’s and grandchildren’s greatest fan and could be found on the bleachers at countless football, basketball, baseball, and volleyball games, tennis matches and concerts. Any newspaper write ups were promptly displayed on her refrigerator and then saved. She was well known at horse shows, suddenly appearing "on the rail" in her pink baseball hat, having left the farm fields to attend and bringing lunch with her.

Dot believed in hard work and in the goodness of people. She and Mil, with their sons operated a vegetable farm, selling produce at their vegetable stand, frequently using a jar and "The Honor System" for payment. She enjoyed meeting customers, would invite them in for a piece of pie, but not give them her recipe.

She loved to play pinochle with her siblings and their spouses on weekend nights. She liked to win and her husband, Mil, was smart enough not to be her partner.


She loved holidays, all of them. She loved the decorations, the food and the shopping and everything about them, because to her, holidays meant family. Family picnics in the summer, extensive meals in the winter, the holidays brought her family to her, and that was what made her shine.

A funeral service will be held on Saturday, November 1, 2014, at 11:00 A.M. at the Howard B. Tate & Son Funeral Home Inc., 2237 New York Route 7, located in Raymertown with Rev. Gaylord Campbell officiating. Burial will follow in Hillside Cemetery also in Raymertown. Relatives and friends are invited to call at the funeral home on Friday, October 31, 2014 from 3:00-7:00 P.M.

At the request of the family, contributions rather than floral gifts may be made to the Pittstown Volunteer Emergency Corps., 60 Parker School Road, Johnsonville, New York 12094 in memory of Dorothy “Dot” Bornt.
Proudly powered by Weebly