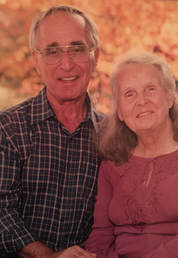 Pittstown- E. George Berard, a longtime resident of Pittstown, died peacefully at his residence, Sunday, September 9, 2018, with his loving family by his side following a short illness.

Born in Bennington, VT, July 28, 1932, George was the son of the late George and Clara (LaFlamme) Berard and for over 66 years the devoted and beloved husband of Mildred (Young) Berard of Pittstown who survives.

George was a graduate of Mount Anthony High School in Bennington.

George was employed for10 years as a Heavy Equipment Operator by the Town of Pittstown Highway Department and later for an additional 11 years in the same position with the Rensselaer County Highway Department. After retiring, George continued to operate the Berard Family Farm in Pittstown where he produced bailed hay.

George was a communicant of St. John the Baptist Roman Catholic Church in North Bennington.

In his quiet time in addition to operating the farm George enjoyed making lumber on his sawmill and creating many priceless pieces of furniture for family members. His wife Milly always said “he could fix anything”.

In addition to his wife, Millie, George is survived by his children, Kathleen and Allen Sheffer of Brunswick, George A. and Jeanne Berard of Wynantskill, Frank E. and Christine of Pittstown, Judy Reiger of Hamden, CT, Christine Petit of Cohoes, David J. and Elizabeth Berard of Dorset, VT, Charles “Will” and Victoria Betit of MI, William and Dianna Betit of NC, Ronald and Diane Betit and Jodie and Bradley Kline, all of Ohio, 24 grandchildren, 9 great-grandchildren and several nieces and nephews. In addition to his parents, he was predeceased by a brother, the late John Berard.

A Mass of Christian Resurrection for George will be celebrated by Fr. Hugh Clary at St. John the Baptist Roman Catholic Church in North Bennington, on Friday, September 14, 2018 at 11:00 A.M. A reception at the Church fellowship hall will follow immediately after Mass. Burial will be private at the convenience of the family. Relatives and friends are invited to call on Thursday, September 13, from 4:00 -7:00 P.M. at the Howard B. Tate & Son Funeral Home Inc., 2237 New York Route 7, located in Raymertown.

​Memorial contributions if desired may be made to either Community Hospice, 315 South Manning Blvd., Albany, NY 12208 or the Mohawk and Hudson Rivers Humane Society, 3 Oakland Avenue, Menands, NY 12204 in memory of E. George Berard.