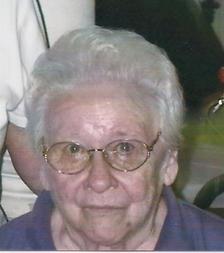 Elva, born September 16, 1927 in Cooksboro (Town of Pittstown) was one of eleven children born to the late Waldo and Alta (Bornt) Brust and for many years the beloved and devoted wife of the late Adam “Luke” Golinski.

In addition to being a homemaker and raising her family, in 1970, Elva began working as a school bus driver, employed by the Waterford-Halfmoon School District. After more than 25 years of demanding service transporting children safely from home to school and back again, she retired in 1995.

Mrs. Golinski was a member of the Evangelical Lutheran Church of Raymertown and assisted at many of the Church’s suppers and events. She enjoyed working in her gardens, keeping her home, cooking, watching game shows on television, caring for her grandchildren and especially spending time with her great-grandson Ayden. Above all else, the things that put the biggest smile on her face was her love of square dancing and riding with Luke on the back of his motorcycle.

Elva is survived by her daughter and son-in-law, Diane and Bruce Hunter and a son and daughter-in-law, Douglas and Kathy Golinski, all of Potter Hill, a sister, Beryl Krogh of Brunswick, two granddaughters, Valerie Mitchell of Wynantskill and Ginelle Hunter of Potter Hill, a great-grandson, Ayden O’Brien of Potter Hill, and several nieces, nephews and cousins.

In addition to her parents and husband she was predeceased by her brothers, Elton Brust, David Brust, Ronald Brust and Kenneth Brust and sisters, Rose Dickinson, Edna Cushman, Norma Zyck, Iva Bonesteel and Marjorie Waite.

​Memorial contributions if desired may be made to the Raymertown Cemetery Association in memory of Elva F. Golinski.

The family would like to extend a heartfelt thank you to Dr. Martinez and the Staff at the Center for Health and Rehabilitation at Hoosick Falls, for their care and support of Elva, during her most recent stay.
Proudly powered by Weebly