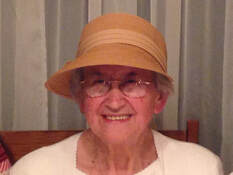 Brunswick- Evelyn C. (Piser) Bonesteel, 89, a longtime resident of Brunswick, died peacefully Thursday evening, November 5, 2020, with her family by her side following a short illness.

Born in the Town of Pittstown, Mrs. Bonesteel was the daughter of the late Herman and Mary Edith (Sherman) Piser and, for 45 years, the wife of the late Ralph O. Bonesteel, who predeceased her February 3, 1996.  Evelyn and Ralph were married on May 19, 1951.

Mrs. Bonesteel attended the Lincolnville District School in Pittstown and was a graduate of Lansingburgh High School.

As a young woman, she was employed at the former Borden’s Ice Cream Company in Lansingburgh, where she met her future husband,Ralph.  More recently she was a homemaker, who enjoyed raising her family and caring for her husband.

Evelyn was an active member of the Brunswick Grange.  She was also an amazing baker who was known for her perfectly crusted apple pies and baked goods.

Evelyn is survived by her six children and their spouses, Gail Zwinge of Summerville, SC, Amy Fortin of Freehold, NJ, Judy LaFleur and Phillip Kelly of Orlando, FL, Jeff Bonesteel of Fayetteville, NC, Wayne and Stephanie Bonesteel of Pittstown, and Jill and Eric Sheffer of Brunswick, seventeen grandchildren, twenty-one great grandchildren, and many nieces andnephews.  In addition to her parents and husband, she was predeceased by seven brothers and sisters and a son-in-law, the late Felix Zwinge.

A graveside ceremony and committal service will be held on Monday, November 9, 2020, at 11:00 a.m. at the Brookside Cemetery in Brunswick with Rev. Jim Knapp officiating.  Face masks and proper social distancing following current NYS Health Department guidelines will be required.

Memorial contributions, if desired, may be made to Community Hospice, 314 South Manning Blvd., Albany, NY 12208, in memory of Evelyn C. Bonesteel.

​Funeral service details are under the direction of the Howard B. Tate & Son Funeral Home Inc., 2237 NY Route 7, located in Raymertown, NY 12180.
Proudly powered by Weebly