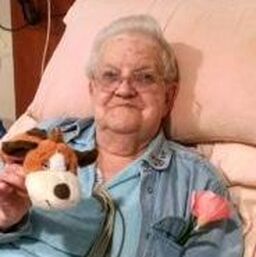 Cropseyville- Florence M. “Flip” Coonradt, 89, a longtime resident of Cropseyville, died peacefully Monday, April 5, 2021, at her home with her loving family by her side.

Born on the family farm in Poestenkill August 14, 1931, she was the daughter of the late Charles C. and Esther (Keneston) Reichard and, for over 64 years, the devoted wife and best friend of David C. Coonradt of Cropseyville, who survives.

Mrs. Coonradt attended the Poestenkill Elementary School and was a graduate of Averill Park High School.

After her marriage to David, Flip became a “Domestic Goddess” and enjoyed raising her family and caring for her home and husband.  She was an incredible cook and an avid gardener, who loved canning her harvest at the end of each growing season. She loved to travel and with David had visited 39 of the United States and many of the National Parks.  She liked to camp, boat, and fish, because those activities kept her in touch with her husband, children, grandchildren, and friends.

Mrs. Coonradt was a longtime member of Gilead Lutheran Church and was active in the Altar Guild and the Gilead Belles Ladies Group.

In addition to her husband, Florence is survived by two sons and daughters-in-law, Kirt and Ann Coonradt of Schodack and Glen and Mary Coonradt of Eagle Mills, six grandchildren, Kristen (Thomas) Polson of Raritan, NJ, Eric Coonradt and Jackie Cubano of N. Greenbush, Bradney St Peter and Betty Villigas-Tsai of Shanghai, China, Adam and Katie Coonradt of Troy, Ashlee and Kevin Wagoner of Latham, and Amy Coonradt of Troy, four great-grandchildren, Caroline, Riley, Scott, and David, and several nieces and nephews.  In addition to her parents she was predeceased by a brother and two sisters.

A private funeral service for Flip will be held at the convenience of the family at the Howard B. Tate & Son Funeral
Home Inc., 2237 NY-7, located in Raymertown with Rev. Judy Converse officiating.  Burial will be at Eagle Mills Cemetery, Brunswick.  At Flip’s request, there will be no public calling.