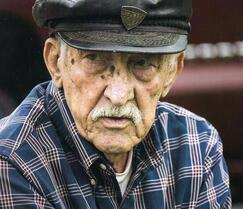 Frank lived an amazing life both personally and professionally, feeling that each day was an opportunity to learn and teach.  His employment started at the Tek Hughes Brush Co., then on to Montgomery Ward & Co. as a stock keeper.  He worked for six years at the Singer Sewing Machine Co. as a store manager, along with Helen.  Frank continued on to Behr Manning Co. for 12 years as a product engineer.  Finally, he excelled at Troy Belting and Supply Co. as the sales manager for 25 years, growing their business with his expertise.  Frank loved being a salesman and knew the importance of great customer service.  Frank was an innovator.  Upon his retirement in 1990, he built the first storage facility in the area, Country Storage, in Brunswick.  Over the course of his life, he also created, owned, and/or operated Heritage Weaving Looms, Great Pride Flagpoles, Charter Fishing Service, and Tywood Products.

Frank was an avid outdoorsman. He built an eight-acre pond stocked with fish for year round enjoyment for his family and friends.  Frank’s love of fishing and camping would bring him to Lake Champlain each summer, finally building a home in Willsboro, NY.

Frank’s life was overflowing with learning and knowledge.  He felt that learning is a skill, and you can do anything by applying yourself.  He was a master teacher and student.  Hard work is the key to success.  “Can’t” was not a word in his vocabulary.  Frank also believed that your hobby should never become your work.

Over his lifetime, Frank collected and restored cars, trucks, motorcycles, banjos, steam engines, antique farm equipment, and more.  He built many boats, including a cedar strip canoe at the age of 87.  It was safe to say that he was either in his garage or out looking for a rusty treasure in a field.  Frank’s restored 1939 Indian motorcycle found a home with actor Steve McQueen and his 1927 Paige is displayed for all to see in a museum.

Frank was one of the original founders of the Gallupville Gas Up and also the steam engine display at the Schaghticoke Fair.  He spent a good deal of his time organizing groups, events, and clubs, such as the Metalworking Club, Woodworkers Club, Green Mountain Auto Club of Bennington, Brunswick Snowmobile Club, Brunswick Planning Board, Center Brunswick Fire Department, plus motorcycle and antique car rides.  In his younger years, he was a proud member of the Civil Air Patrol.

Frank lived an amazingly full life, which will be celebrated for years to come.  He was highly intelligent, worked hard, and was always looking for a more efficient way.  Frank, his knowledge, and storytelling will be missed by all.

A private family visitation and funeral service, in accordance with the current New York State COVID-19 Social Distancing Mandates, will be held June 11, 2020, at the Howard B. Tate & Son Funeral Home Inc., 2237 NY-7, located in Raymertown. Burial will follow in the family plot located at Eagle Mills Cemetery in Brunswick.  There will be no public calling.

At the request of Frank’s family, contributions in his memory may be directed to the Volunteer Fire Company of Center Brunswick, 1045 Hoosick Road, Troy, NY 12180.
Proudly powered by Weebly