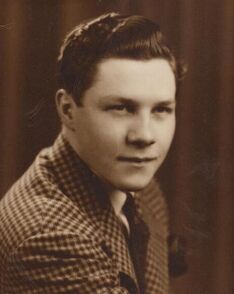 Brunswick- George W. Jacques III, 97, a resident of Haynersville for over 62 years, died peacefully Friday morning, November 19, 2021, in the comfort of his home with his devoted wife and family by his side following a brief illness.

Born in Green Island, January 8, 1924, George was the son of the late George W. Jacques Jr. and Edith M. (Hyde) Jacques and, for 75 years, the husband of his beloved wife, Jeannette G. (Engquist) Jacques of Brunswick, who survives.

George was a graduate of Lansingburgh High School.

At the age of 19, George enlisted in the United States Navy on August 10, 1943.  After completing basic training, he departed for the Pacific Theatre during WWII, where he was a member of the Sea Bees, and his ship saw action in the Battle of Iwo Jima.  At the time of his honorable discharge on February 7, 1946, he had earned the rank of Shipfitter 2nd Class and was awarded several medals and ribbons, including the Asiatic Pacific Ribbon with two bronze stars. George was the last surviving member of his See Bee Unit, 133CB Battalion assigned to the 4th Marines.

From 1959 until his retirement in 1989, he was employed as a mechanical engineer at the Watervliet Arsenal in Watervliet.  While working there, he also developed and was the owner and operator of Terrace Haven Mobile Home Park and The Outing Shop, a mobile home sales, accessories, camping, and RV equipment company, both in Brunswick.

In retirement George was known as “Mr. Uncle Sam” in the Capital District for his many displays, statues, and work to educate the public about the historic significance of American hero and Troy resident, Sam Wilson.  Through his actions, the city of Troy established the Uncle Sam Trail and the designation of many Uncle Sam sites, including his grave in Oakwood Cemetery, which have received United States Historical Site status.

George was a member of the All Saints Episcopal Church in Hoosick, a Life Member of the VFW Sullivan-Jones Post #7466 in Poestenkill, and a former member of the B.P.O.E Lodge #2556 in Brunswick.

In his quiet time, of which there was not much, George enjoyed woodworking in his shop and visiting with his many neighbors, family, and friends about politics and current affairs.

In addition to Mrs. Jacques, George is survived by two daughters and a son, Janice J. and Timothy Holt Sr. of Haynersville, Cindy L. Premo and long-time partner, Louis Little of Chestertown, and Ronald S. Jacques of Potter Hill, a brother and two sisters, Ray Jacques, Marie Dozois, and Vivian Morelli, four grandsons, Timothy Holt Jr., Shawn Holt, Christopher Jacques, and Russell Jacques, eight great-grandchildren, and several nieces and nephews.  In addition to his parents, he was predeceased by a son, the late Leslie G. Jacques, and three sisters, Fran, Kate, and Edna.

A graveside ceremony and interment with military honors for George will be held on Monday, November 29, 2021, at 2:30 p.m. at the Gerald B. H. Solomon Saratoga National Veterans Cemetery in Schuylerville.  Relatives and friends are invited and may call on Sunday, November 28, 2021 from 1;00-3:00 p.m. at the Howard B. Tate and Son Funeral Home, 2237 New York Route 7, located in Raymertown.

Memorial contributions, if desired, may be made to the Sullivan-Jones, VFW Post #7466, 25 Veterans Street, Poestenkill, NY 12140, in memory of George W. Jacques III.