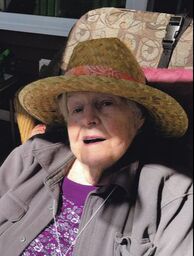 Cohoes- Gertrude R. Miles, 91, a resident of the Troy area for over 50 years, and more recently Clifton Park and Cohoes, died peacefully Thursday, March 12, 2020, with her family by her side, at The Eddy Green Village following a short illness.

Born in Au Sable Forks, NY, on October 31, 1928, Mrs. Miles was the daughter of the late Wallie and Jessica (Rich) Hewston Sr., and for over 40  years, the beloved wife of the late James W. Miles Sr.

After marrying Mr. Miles and raising her family, she entered the work force and was employed as a housekeeper at Samaritan Hospital in Troy for over 24 years.  She retired in 1993.

An avid reader, Mrs Miles enjoyed caring for her home and family. She loved spending quality time with her grandchildren and playing many comical games of cards with Au Sable friends. She was a wonderful cook, enjoyed many camping trips with her late husband, Jim and liked to relax by crocheting.

Mrs. Miles is survived by two daughters and a son, Jessie “Jane” Miles (Jerry Davis) of Cooksboro, Debra  (Ron) Harris of Lansingburgh, and Wallie (Gail) Miles of Clifton Park, a brother-in-law, John Ryan of Au Sable Forks, 16 grandchildren, many great-grandchildren, and several nieces and nephews.  In addition to her parents and late husband, she was also predeceased by a son and a daughter, the late James Miles Jr. and Darlene Miles, five sisters, Linda Hewston, Jane Thomas, Lucretia Rabideau, Lottie Ryan, and Pearl Calhoun, and a brother, Wallie Hewston Jr.

A funeral service will be held on Monday, March 16, 2020, at 7:00 p.m. at the Howard B. Tate & Son Funeral Home Inc., 2237 New York Route 7, located in Raymertown. Relatives and friends are invited to call at the funeral home on Monday from 5:00 – 7:00 p.m. prior to the service.  Burial will take place in Maplewood Cemetery in Cooksboro later this Spring at the convenience of the family.

Memorial contributions, if desired, may be made to either the Pittstown Volunteer Emergency Corps, 60 Parker School Road, Johnsonville, NY 12094, or to the Pittstown United Methodist Church, 47 Old State Route 7, Valley Falls, NY 12185, in memory of Mrs. Gertrude R. Miles.
Proudly powered by Weebly