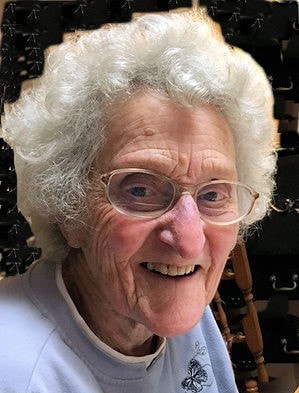 Even at 106 years old, Harriet Eddy Dickinson was never so animated as when she was describing her childhood on the Eddy Farm in Brunswick, NY—the milk cows in their stanchions, the kittens in the hayloft, the wagon house, the smokehouse, even the outhouse!  Harriet was born on May 4, 1914, at the Cole Farm, which adjoined the Eddy Homestead.  She was one of eight daughters of Charles Avery Eddy and Mercie Marie Bornt.

Raised to appreciate education, Harriet became an excellent student.  In 1931, she earned the Outstanding French Language prize upon her graduation from Lansingburgh High School.  Following high school, she attended Troy Business College, where she honed her handwriting, typing, shorthand and math skills, which would be key to her future work success.  By 1940, Harriet held a bookkeeping position in a Troy medical supply company.  In the 1950’s, she served as a census taker for the United States Census Bureau, based out of Hartford, CT.  In the 1960’s, she embarked on the final phase of her career at the William E. Sheridan Insurance Company in Watervliet, NY, where she remained until her retirement in 1980.

Whether living on the farm, or in the village of Wynantskill, NY, where she eventually settled, Harriet’s family, her faith, and her surrounding community were the focus of her life.  Harriet fell in love with Ronald W. Dickinson in third grade, went on to marry him in 1939, and spent 50 happy years with him before his death in 1990.  Together they became parents to four children, all of whom survive her:  R. William Dickinson (Polly) of Enfield, NH; Allen E. Dickinson (Lillian) of Colonie; Susan A. Mulholland (Mark) of Leesburg, VA; and Christine J. Dickinson of Albany.  Harriet is also survived by 5 beloved grandchildren:  Scott Dickinson (Robin) of Troy; Christopher Dickinson (Carol) of Albany; Laurie Vroman (Pete) of Canajoharie; Bruce Dickinson (Christine) of Canaan, NH; and Karen Duprey (Dwayne) of Bedford, NH.  She is also survived by 13 great-grandchildren and one great-great grandchild, along with numerous nephews and nieces all over the country.  In addition to her parents and her husband, Harriet was pre-deceased by her sisters Lola Eddy, Sylvia Eddy, Florence Rosston (Cy), Dorothy Chase (Ralph), Lucy McKeon (Ward), Marian Eddy and Althea Eddy.

Harriet’s faith in God was a hallmark of her life.  Raised in the Raymertown Evangelical Lutheran Church, Harriet joined the First Reformed Church of Wynantskill (FRCW) on October 6, 1946.  For many decades, she enthusiastically supported the worship and activities of FRCW:  Thursday morning Women’s Bible Study, the Prayer Shawl Ministry, the annual church bazaar, Lenten breakfasts and community suppers.  In 1994, she joined other members for a once-in-a-lifetime trip to the Holy Land.  She remained a member of FRCW until her death, eventually becoming the oldest member of the congregation.  First Reformed Church was the location where she and Ronald renewed their marriage vows in 1989 and where she hosted both her 90th and 100th birthday parties for hundreds of her relatives and friends.  On the latter occasion, New York State Assemblyman John T. McDonald III of the 108th Assembly District, presented Harriet with a citation that recognized her dedication to family and community.

As parents to a special-needs child, Harriet and Ronald became early advocates for Autism research through the Albany Chapter of the National Society for Autistic Children.  Harriet enjoyed square dancing with Ronald at the Tamarac Twirlers, was an active member of the Rensselaer County Home Bureau, was an accomplished seamstress, a devoted wife, mother and grandmother, a faithful friend, and—above all, a beloved Child of God.

A private family internment was held at the Hillside Cemetery, Pittstown.  A future celebration of Harriet’s life is planned, following the Coronavirus pandemic.  Memorial contributions may be made to First Reformed Church, 413 Main Avenue (PO Box 159), Wynantskill, NY 12198.

Arrangements are under the direction of the Howard B. Tate & Son Funeral Home Inc., 2237 New York Route 7, Troy, NY 12180.
Proudly powered by Weebly