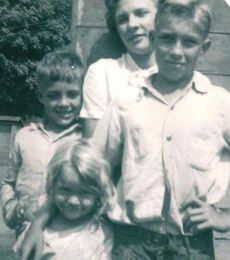 Born in Arlington, Vermont, Jim was the son of the late Ross and Ruth (Fowler) Schellenger and for many years the husband of the late Patricia Schellenger who predeceased him in 2009.

Jim was a graduate of Stillwater High School. Throughout his adult life Jim worked as a truck driver for many area and nationwide trucking companies as a both a “straight job and semi-truck driver” Most recently he drove for the Price Chopper Supermarket and Allied Van Lines. He retired in early 2001.

Jim is survived by two sisters, Shirley Garmley of Troy and Mary Tucker of Florida, a brother and sister-in-law, Karl Schellenger and Mary Lee Wilcox of Pittstown, several children, grandchildren and nieces and nephews.

A funeral service will be held on Thursday, January 11, 2017 at Noon, at the Howard B. Tate & Son Funeral Home Inc., 2237 New York Route 7, located in Raymertown. Burial will follow in Oakwood Cemetery in Troy. Relatives and friends are invited to call at the funeral home on Thursday from 11:00 A.M. until Noon prior to the funeral service.