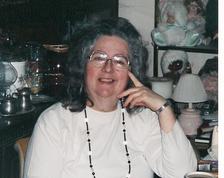 Pittstown- Kathleen A. (Bisnett) Clayton, 79, a longtime resident of Route7 in Boyntonville, died suddenly, Thursday, April 2, 2015, at Samaritan Hospital in Troy after being stricken at her residence.


Born in Cohoes, February, 28, 1936, Mrs. Clayton was the daughter of the late James N. and Lillian (Lavigne) Bisnett and for over 60 years the beloved wife of Robert C. Clayton of Boytonville who survives.


Mrs. Clayton was a graduate of Cohoes High School.


Beginning in the 1960s and through the late 1970’s, Kathleen was employed as a telephone operator by the former NY Telephone Company in Troy and more recently by the former New England Bell Company in Bennington. After retirement she worked as a homemaker, raising her family and caring for her home and husband.


She was a communicant of the former St. George’s Catholic Church in Pittstown an avid baker and enjoyed canning vegetables her husband raised in the garden. In her quiet time, according to her children, she was a “Wedding cake baker and decorating fool” creating the perfect cake for many local couples on their special day, but above all else she adored and loved to spend time with her many grand and great-grandchildren.


In addition to her husband, Mrs. Clayton is survived by her children, Robert Clayton, Mark and Linda Clayton, Wendy Clayton and Matthew Clayton, all of Boyntonville, Cindy and Kenneth Mayes of New Castle, ME and David and Jennifer Clayton of Saratoga Springs, a bother, Thomas Bisnett of Ballston Spa, five sisters, Lois Comley of Schenectady, Barbara DeMase of So. Carolina, Patricia Ryan of Albany, Mary Ellen Carey of Pennsylvania and Susan Bisnett of Ballston Spa, fourteen grandchildren, sixteen great-grandchildren and many nieces and nephews. In addition to her parents, she was predeceased by two brothers, the late James Bisnett and Robert Bisnett.


A Mass of Christian Resurrection for Mrs. Clayton will be celebrated on Tuesday, April 7, 2015, at 9:30 A.M. by Fr. Randall Patterson at Our Lady of Victory Church, located at the corner of Marshland Court and No. Lake Avenue in Sycaway. Entombment at St. Mary’s Cemetery in Troy and a reception at the P.V.E.C. Brundige Hall in Pittstown will follow. Relatives and friends are invited to call on Monday, April 6, 2015, from 4:00 -7:00 P.M. at the Howard B. Tate & Son Funeral Home Inc., 2237 NY Route 7, located in Raymertown.


Memorial contributions if desired, may be made to the Pittstown Volunteer Emergency Corps, 60 Parker School Road, Johnsonville, NY 12094 in memory of Kathleen A. Clayton