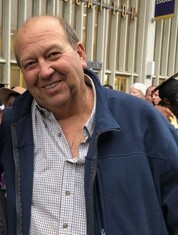 Born in Cambridge, NY, November 30, 1959, Larry was the son of Rupert and the late Elinor (Pedersen) LaPoint and for over 32 years the husband of Pauline (Temple) LaPoint of Averill Park, who survives.  Larry and Pauline were married on December 12, 1987.

As a boy, Larry’s family relocated from Cambridge to Florida, where he attended high school and played sports.
As a young man, he returned to the Capital District and in 1986 established Grant Paving Company in Waterford.  For 33 years Larry did residential and commercial paving in the tri-city area and some years would work in Florida during the winter break in New York.

Larry was an avid motorcyclist and liked to watch NASCAR races and all types of sports on TV.  For 35 years, Larry was also a “friend of Bill.”  Above all else, was his love for and spending time with his step grandchildren, Danny Cole, Ashley, Taylor, and the late Cierra Sweet, and great-granddaughter Alli.

In addition to his wife, Pauline, his survivors include a brother, Ronny LaPoint of Albany, a sister, Wendy LaPoint of Clifton Park, two sisters-in-law, Louise Rist and Rose Temple, both of Pittstown, stepchildren, Edward D. Sweet of Raymertown and Brenda Cole of Averill Park, his step grandchildren, a great granddaughter, and several nieces and nephews.

A Mass of Christian Resurrection for Larry will be celebrated on Friday, August 2, 2019, at 10:30 a.m. by Fr. Tom Holmes at St. Henry’s Church in Averill Park.  Burial will follow in St. John’s Cemetery in Schaghticoke.  Relatives and friends may call at the Church on Thursday, August 1, from 4:00 – 7:00 p.m.

​At the request of the family, memorial contributions in lieu of flowers may be made to the “Alli McLoughlin Fund” c/o any Cap/Com Credit Union branch in memory of Larry G. LaPoint.
Proudly powered by Weebly