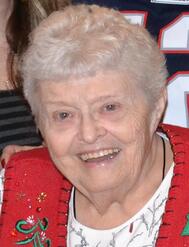 Born June 30, 1933, in Cropseyville, NY, Laura was the daughter of the late Frances Dayton Nichols and devoted wife for over 63 years of the late Ronald “Barney” Wright, who died in October of 2015. Laura and Barney were married May 9, 1952.

Laura graduated from Troy High School, Class of 1950. Upon her graduation she began her work career at the former R.C. Reynolds Company in Troy as a bookkeeper. From there, she took a similar position at Albany Felt Co. in Albany. Following her marriage and birth of her children, Laura started a career with the Brittonkill Central School District in 1965, retiring after 30 years of service to become “Nanny” to her cherished grandchildren. She was also the secretary and treasurer to the Eagle Mills Board of Fire Commissioners for many years and worked seasonally at H&R Block.

Laura was the most loving and devoted mother, grandmother, and great grandmother. She found great joy in spending time with her family. She would drop everything to help out both family and friends at any time.

Her survivors include her son and daughter-in-law, Richard and Kathleen Wright of Eagle Mills, with whom she resided, and their six children, Patrick M. and Sheri Wright of Rochester, NH, Alesha M. Wright and Nate Stroffoleno of South Glens Falls, Eric C. Wright of Cambridge, Dylan R. Wright, Connor J. Wright and Madison L. Wright, all of Eagle Mills, three great grandchildren, Amelia M. and Henry M. Wright of Rochester, NH, and Laney E. Stroffoleno of South Glens Falls, seven brothers and sisters, Marilyn and Don Houser of Eagle Mills, Robert and Linda Dayton of Cropseyville, Rose and the late Carl Houser of Cropseyville, Edward and Kathy Dayton of Troy, Wayne and Sue Dayton of Cropseyville, William and Deb Dayton of Brunswick, and James and Deb Dayton of Brunswick, and many nieces and nephews. In addition to her late husband, Laura was predeceased by her son, Robert W. Wright, September 21, 2013, and a sister and brother-in-law, Vivian and Eugene Murray.

At the request of the family, memorial contributions in lieu of flowers may be made to the Eagle Mills Fire Department, 627 Brunswick Road, Troy, NY 12180, in memory of Laura (Dayton) Wright.
Proudly powered by Weebly