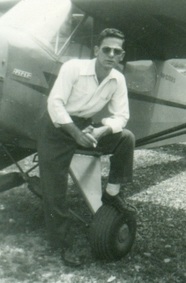 The son of the late John and Santa (DiTomasso) Morizio, Lou was born December 4, 1926 in Watervliet and for over 65 years was the loving husband of Ruth Charmaine (Birmingham) Morizio of Brunswick, who survives. Lou and Charmaine were married on October 15, 1950.

On October 26, 1944, at the age of 17, Lou enlisted in the United States Navy and served the country during World War II. After basic training at Sampson, NY he was stationed at several Naval Airbases in Texas and later New York City prior to being honorably discharged with the rank of Seaman First Class on July 18, 1946.
A master carpenter by trade, Lou built hundreds of homes throughout the Capital Region with his brother Joe, then later as President of Leo Morizio Builders.  People would often approach him years later in fond recollection of the homes he built for them.

As a former communicant of St George’s Church in Pittstown, Lou chaired the building committee and oversaw the construction of the Jubilee Hall.  He had a deep devotion to God and found great joy in serving Him.  Among his charitable work, Lou held Bible studies at the Mt. McGregor Correctional Facility in Wilton, NY.

Lou had a passion for flying.   He earned his commercial pilot’s license shortly after the War.  After taking an extensive break to raise his children, Lou returned to his love of flying when he was in his early 70’s.  He enjoyed sharing stories of his flying adventures.

While flying was his passion, it pales in comparison to his love of family.  He treasured his children, grandchildren, and great-grand children with unconditional love. But his greatest love of all was his beloved Charmaine.

In addition to his wife, Charmaine, his survivors include his six children and their spouses, John and Charlene Morizio of Pittstown, Joe Morizio of Pittstown, Cindy and Jerry Farina of Brunswick, Lou and Patti Morizio of Averill Park, Tony and Cherie Morizio of Brunswick and David Morizio of Sycaway, four sisters and a brother, Anne Marie Marca of PA, Mary Pazzaglini of NC, Palma Theresa Poochigian of FL, and Clara Morizio and John Morizio both of Binghamton, nine grandchildren, two great-grandchildren and several nieces, nephews, and cousins.  In addition to his parents, he was predeceased by two brothers, the late Angelo Morizio of Binghamton, NY and Joseph Morizio of Schaghticoke, NY.

A Mass of Christian Resurrection will be celebrated in Lou’s honor by Fr. Randall Patterson at 1:00 P.M. on Saturday, April 2, 2016, at Our Lady of Victory Church (at the corner of North Lake Avenue and Marshland Ct.) in Sycaway. Relatives and friends are invited to call and greet the family on Friday, April 1, 2016, from 4:00-8:00 P.M., at the Howard B. Tate & Son Funeral Home Inc. 2237 NY Route 7, located in Raymertown. Burial with military honors will be held privately Monday, April 4, 2016 at the Gerald B.H. Solomon, Saratoga National Veterans Cemetery in Schuylerville.

Memorial contributions at the request of the Morizio family if desired, may be made to the Wounded Warrior Project, PO Box 758517, Topeka, KS 66675 or at www.woundedwarrior project.com, in memory of Leo “Lou” Morizio.
Proudly powered by Weebly