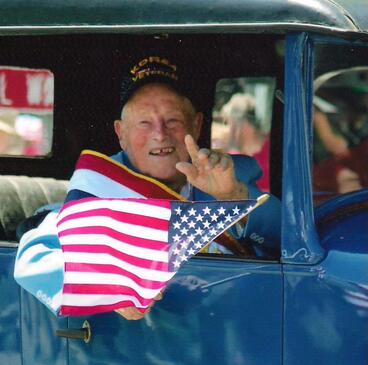 Brunswick- Leonard C. “Len” Roden, 94, a lifelong resident of Brunswick, died peacefully in the comfort of his home, surrounded by his family, Monday, April 25, 2022.

Len was born June 5, 1927, on the family farm in Brunswick and was the son of the late Chester and Mabel (Knapp) Roden.

He attended the local District School and was a graduate of Troy High School.

As a young man, he worked on the family farm until being inducted into the United States Army in September 1950.  After basic training at Ft. Devens, MA, he was sent to South Korea as part of the 7th Infantry Regiment, 3rd Infantry Division, Company F.  He saw heavy fighting in the “Iron Triangle” of North Korea and was wounded in battle.  After hospitalization and recovery, (his parents were informed that he had died), he returned to the front with his unit until being honorably discharged September 13, 1952.  For his wounds, Len earned the Purple Heart, for his bravery and valor he earned three Bronze Stars, the Combat Infantryman Badge 1st Award, and elevated to the rank of Sergeant. Len was incredibly proud of his service and that two of his grandsons are currently in the U.S. Army.

On May 25, 1952, during leave from the Army, he married the love of his life, Janet Grace, at Ft. Hood, Texas.  The couple were married for over 69 years and, except for a short return to the service for Len, were inseparable until Janet’s death in 2021.

Len was employed as a maintenance mechanic at Niagara Mohawk Power Corporation in Albany, where he was fortunate to work alongside his twin brother, Leland.  After more than 36 years of dedicated service, he retired in May of 1988.

In addition to his family, the other center of Len’s life was the Brunswick Presbyterian Church. He was an active participant as a member of the choir for over 60 years, caretaker and maintenance worker, lawn mower, and worship attendee.  He was also active in the community as a member of NYS Grange, International Order of Odd Fellows, the Purple Heart Group of Troy, the Korean War Veterans, Disabled American Veterans, The American Legion, Sullivan-Jones VFW Post #7466 in Poestenkill, and the Brunswick Historical Society, to name a few.  In his quiet time, he enjoyed mowing, visiting with his family and friends, caring for his home, and more recently, taking car rides with his daughter.

A funeral service for Len will be held on Friday, May 6, 2022, at 10:00 a.m., at the Brunswick Presbyterian Church, 42 White Church Lane, Troy, NY, with his friend, Rev. Harry Heinz officiating.  Burial with military honors will follow in Brookside Cemetery in Brunswick, adjacent to the church.  Relatives and friends are invited to call at the church on Thursday, May 5, 2022, from 4:00-7:00 p.m.

Excerpts from Rensselaer County Resolution P/492/21
Whereas, It is consistent with the duty of this Legislative Body to recognize achievements of the citizens of Rensselaer County, we acknowledge with respect and admiration individuals whose bravery and dedication have been so valuable to our community; and
Rensselaer County owes a great debt to the men and women of our loyal Armed Forces, who so bravely stand ready to preserve our American heritage;

Leonard “Len” C. Roden was born on June 5, 1927, in Brunswick, New York, on his family farm to the late Chester J. Roden and Mabel (Knapp) Roden.  He is the brother of John, Willard, Carolyn, Leroy, and twin brother to Leland; and
Len attended school at the end of the road that he grew up on in a one room schoolhouse, where his aunt taught all grades through 8th grade, and then went on to attend Troy High School.  After graduating, Len stayed on working at the family farm until he was drafted into the United States Army; and
At the age of 23, Len was drafted into the United States Army, and was in the 7th Infantry Regiment, Third Infantry Division, Company F.  From 1950-1952, Len served in the Korean War, where he was assigned to the Armored Infantry Division; and
After completing his training in Fort Devens, Massachusetts, Len traveled by train, ship, barge, and truck to reach South Korea, where the fighting began.  He was shot in the hip above the North Korean 38th parallel known as the “Iron Triangle.”  It was evening, resources were limited, and there was another soldier more seriously injured, so Len walked through the night and into the next day with the gunshot wound so the other soldier could be carried.  After he was released from the hospital a month later, Len went back to fight, fully knowing that the Army was shorthanded; and
Len’s service and injury earned him a Purple Heart, along with many other awards.  In addition, he also received the National Defense Service Medal, Korean Service Medal with three bronze service stars, Combat Infantryman Badge 1st Award, and the United Nations Korean Service Medal.  On September 13, 1952, Len was honorably discharged from the United States Army with the rank of Sergeant; and
After Len returned home, he married hos wife of 69 years, the late Janet Grace Roden, on May 20, 1952, at Fort Hood, Texas.  Together they have three children:  Kathy Costantino, Carol Van Hattum, and Stephen Roden; and
Len was employed by Niagara Mohawk Power Corporation for 36 years, where he worked alongside his twin brother, Leland; and
Len has devoted his life to helping others by being an active member of the community, and has belonged to many organizations throughout his life.  These organizations include NYS Grange, Odd Fellows, Purple Heart of Troy, Korean War Veterans, Disabled American Veterans, Brunswick Historical Society, American Legion, Sullivan Jones VFW Post 7466 of Poestenkill, and Society of Third Infantry Division; and
The First Presbyterian Church of Brunswick has always been Len’s center of existence.  He has attended the church his entire life and is now one of the oldest members.  Len truly  loves living and is known for his devotion to his church family, friends, community, and country.  He sings “God Bless America” every night at bedtime, and is considered to be a true patriot and hometown hero; now therefore, be it
Resolved that this Legislative Body does hereby acknowledge the sacrifices this great man and his family have made and continue to make for the ideals for which this nation stands, fully confident that his achievements and contributions will live on to serve as a legacy for all.