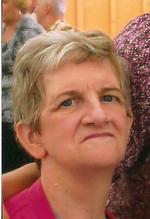 Born in Troy, May 9, 1948, Linda was the daughter of the late Raymond and Eleanor (Grogan) Banker and for many years the wife of the late Arthur P. Rose Sr. who predeceased he in September 2000.

Linda was a graduate of Hoosic Valley High School.

As a young woman she worked for many years for the “Mr. Food” television program and for it’s host. More recently she has worked as a prep cook and sous-chef at the Franklin Plaza Banquet House in Troy. She retired in 2006.

Linda was a member of the Pittstown United Methodist Church, the Pittstown Volunteer Fire Company “Ladies Auxiliary,” a 4-H Leader of the Cottontails 4-H Club. She was a hard worker and loved to care for her home, her late husband and enjoyed raising her family. In her quiet time of which there wasn’t much she enjoyed playing “Bingo.”

Linda is survived by her children, Tina and Patrick Turriglio and Arthur P. and Louise Rose Jr. all of Pittstown, her beloved grandchildren, Patrick, Andrew, Emily and Katelynn Turriglio and Ellie Rose all of Pittstown, a great-grandson, Timothy, her sisters and brother, Jill Acceria, Becky English and Hal Banker, her brothers and sisters in law, Sharon Scranton, Karen McGee, Melvin Rose, Robert Rose and Janice Banker and many nieces nephews and cousins. In addition to her parents and husband, Linda was also predeceased by a sister, the late Kay Wagner and a brother, the late Dennis Banker.

A funeral service for Linda will be held on Wednesday, June 20, 2018 at 10:00 A.M. at the Howard B. Tate & Son Funeral Home Inc., 2237 New York Route 7, located in Raymertown. Burial with a reception to follow at the Pittstown United Methodist Church Fellowship Hall will be held in the Norton Cemetery in Pittstown. Relatives and friends are invited to call at the funeral home on Tuesday June 19th from 4:00 – 7:00 P.M.