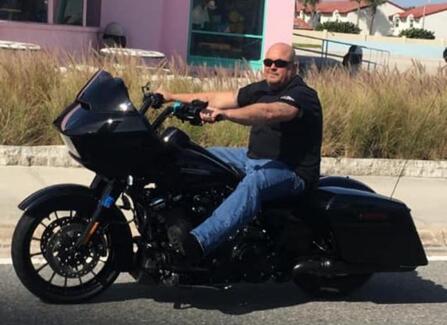 Born in Troy, January 14, 1964, he was the son of Robert Moon of North Carolina and the late Jane M. (Rifenburg) Moon.

Bob was a graduate of Berlin High School.

his quiet time, of which there was very little, Bob enjoyed riding his motorcycles, traveling and the taking an occasional cruise to unwind. He loved watching racing, especially if meant traveling to watch his son, Kyle, but his greatest enjoyment came from spending quality time with all his children, family and many friends.

In addition to his father, Robert, Bob is survived by his children, Kyle Moon of North Carolina, Katie Moon of Pittstown and Maria and Sara Moon, both of Cropseyville, two sisters, Susan (Moon) Archer of Averill Park and Melissa Moon of Troy, two granddaughters, Aubrie and Averie Moon of Pittstown, several aunts, uncles, nieces, nephews and cousins.

A private funeral service will be held at the convenience of the family at the Howard B. Tate & Son Funeral Home Inc., 2237 NY Route 7, located in Raymertown. There will be no public calling.

​Memorial contributions if desired may be made to The Capital Region American Heart Association, 4 Atrium Drive, Albany, New York 12205, in memory of Robert K. Moon.
Proudly powered by Weebly