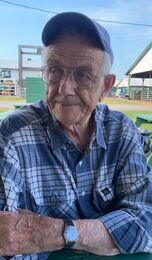 Born in Troy, July 5, 1934, Bob was the son of the late Robert D. and Elizabeth (Hilaire) Galbraith and for over 66 years the husband of Lois E. (Crogan) Galbraith of Sycaway who survives. Bob and Lois were married on October 29, 1955.

Bob was a graduate of Lansingburgh High School.

For over 38 years he was employed as a Lab Tech by the Nashua Corporation in Watervliet and retired in 2002. More recently he was employed for the past 20 years as a courier by Community Care in Troy.

Bob was a member of the Brunswick Sportsman’s Club, was an avid reader, loved to tinker in his garage and had an extensive collection of pocket knives and flashlights.

A funeral service for Bob will be held on Monday, May 16, 2022 at 11:30 a.m. at the Howard B. Tate & Son Funeral Home Inc., 2237 New York Route 7, located in Raymertown with Fr. Edward Kacerguis officiating. Relatives and friends are invited to call at the funeral home on Monday, from 10:30 – 11:30 a.m. prior to the service. Burial at Eagle Mills Cemetery in Brunswick will be at the convenience of the family.