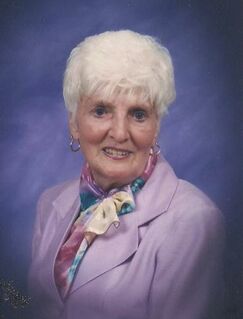 Born in Buskirk, September 13, 1926, Dot was the daughter of the late Charles and Katie (Way) Sawtell.

Dot was a 1945 graduate of the Hoosick Falls High School.  While a student there she met a young man named Donn Brownell, to whom she would marry and be inseparable from for the rest of her life.  Wonderful each in their own way, Dot would shine when she was with her husband of over 67 years.  Dot and Donn were married on July 14, 1951.

In the early days of their marriage, she assisted Donn on the Brownell family farm with simple chores, in addition to caring for her home, husband, and her nephew, Marty, who came to see her as his “second mother.”

For over 25 years, Dot was employed as the Executive Secretary at the former James Thompson and Company Manufacturing Mill in Valley Falls. She reveled in her managerial role and enjoyed working with the many suppliers, customers, and employees. Her most prized benefit was the many business trips to New York City, where she had the opportunity to “dress to impress” and after the work was done, explore her love of fashion and shopping in Macy’s and other “high end” shops and boutiques. She retired shortly before the mills closing in 1992.

Dot was a lifelong member of the Christ United Methodist Church of Johnsonville and enjoyed an active social life with Donn as members of the Co-Mingle group of the church.  She also liked to dance and could be found with close friends at many weekend social events where she would dance the night away with her girlfriends. She loved to sew, made many of her own outfits, and was an avid Hummel figurine collector.
In addition to Donn and her nephew and recent caregiver, Marty Harrington of Albany, she is survived by many nieces and nephews, great nieces and nephews, cousins, and friends. She was predeceased by two sisters and a brother, the late Pauline Simpson, Gwendolyn Waldron, and William Sawtell.

A funeral service for Dot, with reception to follow, will be held Saturday, February 16, 2019, at the Christ United Methodist Church of Johnsonville at noon, with Rev. Jim Knapp officiating. Burial at Elmwood Cemetery in Schaghticoke will be held later this spring.  Relatives and friends are invited to call at the Church on Saturday from 10:00 -11:45 a.m. prior to the service.

Memorial contributions, if desired, may be made to Christ United Methodist Church, 22 Bridge Street, Johnsonville, NY 12094, in memory of Stella “Dot” Brownell.

​Funeral service details are under the direction of the Howard B. Tate and Son Funeral Home Inc., 2237 NY Route 7, located in Raymertown.
Proudly powered by Weebly