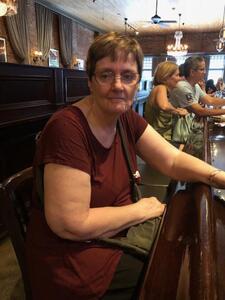 Born Thursday, April 16, 1953, Vickie was the daughter of Robert W. Hewitt of Speigletown and the late Lillian (Monroe) Hewitt, who predeceased her in 1983.

Vickie was a graduate of Averill Park Central High School’s Class of  1971.

She was employed for over 30 years by the Rensselaer County Department of Social Services and most recently held the position of Child Support Collection Services Supervisor.  She retired in 2016.

Vickie was an avid reader, enjoyed the handcraft of crocheting, loved the ocean and RV’ing, and liked cooking breakfast instead of lunch or dinner for her grandchildren, “Because who can ruin breakfast.” She liked to play video games, was a huge Elvis Presley fan, and had a “wicked sense of humor.” Most of all, she fiercely loved and was loved by her family.

Vickie is survived by her father, Robert, and his wife, Debbie Reed-Hewitt, two daughters and a son-in-law, Jennifer and Jason Eobbi of Troy and Jaime Gallagher of North Greenbush, five grandchildren, Kaylyn Hohn of Schodack, James Gallagher Jr., Patrick Gallagher, and Peyton Gallagher , all of North Greenbush, and Mary Eobbi of Troy, her siblings, Michele (the late Bill) Amidon of Alabama, Michael R. and Helene Hewitt of Poestenkill, Scott L. and Laurie Hewitt of Florida, Randy S. Hewitt of Florida, and Laurie A. and Jim Prescott of Troy, paternal aunts and uncles, Kenneth and Peggy Hewitt, Barbara (the late Raymond) Hewitt, Paul and Sharon Maxon, and Linda (the late Charles) Hewitt,
her former husband and friend, James Burkett of Cropseyville, and several nieces, nephews, and cousins.  In addition to her mother, she was predeceased by a maternal aunt and uncle, Mert and Les.

​Memorial contributions if desired may be made to the “Wounded Warrior Project” in memory of Vickie L. (Hewitt) Halse.
Proudly powered by Weebly