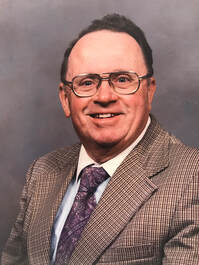 Born in Troy, October 2, 1926, Bill was the son of the late Irvin W. and Mildred (Collins) Derrick, and brother of Irvin (Elizabeth) Derrick of Troy, who survive, and the late Leland (Edith) Derrick.

Bill enlisted in the United States Army on May 12, 1944 and upon graduating with his Troy High School Class of 1944, left immediately for basic training at Ft. Dix, New Jersey. He was  stationed in Europe as World War II was coming to a close and served as a non-commissioned Medical Officer. In a short period of time he earned the rank of Staff Sergeant with the 34th Field Artillery Battalion. After two years serving oversea, Bill was honorably discharged in August of 1946.

Following his military service he was employed as a production worker for several years at the Bendix Company’s, Green Island plant. As he was working, he attended Union College in Schenectady, taking night and weekend classes, until he earned a Bachelor Degree in Economics in 1971.

After earning his diploma at Union College, he accepted a position as a Computer Programmer at the New York State Department of Alcohol and Substance Abuse Services in Albany.
After more than 20 years, he retired on May 30, 1983.

Bill was an avid walker and will be remembered by many for his twice daily exercise trips up and down Route 7 in Brunswick. He enjoyed the hobbies of coin collecting, motorcycle and snowmobile riding, bowled in several area leagues, liked to watch and follow the NY Jets and Mets games when he could and rooted for Tony Stewart in NASCAR’s Spring Cup Series.

A private funeral service for Bill will be held at the convenience of the family at the Howard B. Tate & Son Funeral Home Inc., 2237 NY Route 7, located in Raymertown. Burial with military honors provided by a U.S. Army Honor Guard will be held at the Gerald B.H. Solomon Saratoga National Veterans Cemetery.

​Memorial contributions if desired may be made to the charity of your choice in memory of William J. “Bill” Derrick.
Proudly powered by Weebly